Holiday - journey through the U.S.A. 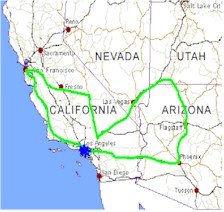 Together with my parents and my brother, from July 2nd 'till July 28th, I made a yourney to the westcoast of the USA. It was a wonderful and impressive experience...

As you can see, San Francisco was the first large city during our trip. When we drove to our campsite in Petaluma, about 45 minutes from San Francisco, we drove across the Golden Gate Bridge. On the other side of the bridge we stopped over at a scenic overlook. There you can see San Francisco from miles away, very special. You could see the highrising skyscrapers and on our right hand was the Golden Gate. We could even see Alcatraz. The Golden Gate Bridge looked very special, mainly because it was foggy (it's rarely not). It gave a very mysterious look on the scene. 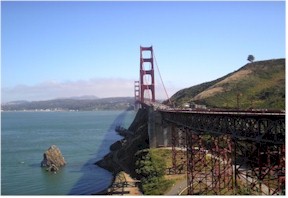 On our second day in San Francisco we made a tour, starting at the campsite. We would pass most of the sights in San Francisco. First we took a closer look at the Golden Gate Bridge. The tourguide told us that every day a part of the bridge is being painted. At the end of the year it is finished and they can start all over again. After the Golden Gate Bridge we went to a golfcourse, there we drove on the grounds. Near the course was a museum, but unfortunately to us it was closed.

Afterwards we went to the beach, near a large public garden. Near the beach was a small museum. There you could see a miniature of the garden. If I remember correctly, the garden was about 3 miles wide. (A mile = approx. 1,6 kilometres). In the Garden we visited a tower, from where you had a great view of San Francisco. You could really see how steep the roads are. There also was a large aerial photograph of San Francisco: the garden a large green strip and the rest all buildings. After our visit to the park we went into town and took a ride on the cable car. That was fun. Sometimes the cable car stopped at a busy junction to let people get on or off the car. 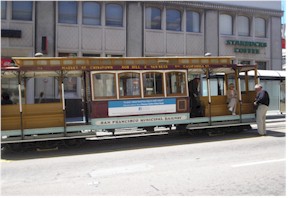 Then we went to China Town. Very nice. You could bring a visit to a fortunecookie factory. That really was boring. We went to Fisherman's Wharf where we all had something to eat. We stood on pier 41, from this pier the boat to Alcatraz leaves. We ate something there. After all this we drove around some more and then went back to the campsite. Really a pity we couldn't stay just a day longer, here in San Francisco!

Vegas was the next large city, and also my favourite one. The campsite was very close to the Strip adjacent to a casino/hotel. You could walk to the Strip, what came in very handy. On our first night we looked round near Circus Circus. That was also where the campsite was. The casino was very nice to see. Lights and sounds everywhere. My dad gambled away one dollar, but unfortunately we didn't win the million dollars. We walked on the Strip but didn't come any further then just past Riviera, across from Circus Circus and Stardust. In a souvenirshop we bought some nice souvenirs and went back. It was after all, a long walk. The following day we started with a refreshing dive in the swimmingpool. and in the afternoon we went to the Strip again to see some more.

First we went to the Venetian. Very nice to see. You could take a ride in one of the gondolas (inside and outside) We wanted to do this at first but it was way too expensive.(outside $40,- and inside $45,- if I remember correctly). On the second floor were all the restaurants and stores. The ceiling was painted like the sky and all the frontends of the stores looked like Venetain houses. It was just as if you were outside, very nice. Then we went to the Mirage. Also beautiful and large. We walked around for a bit and went on to Ceasar Palace, where we ate. Fine food there. 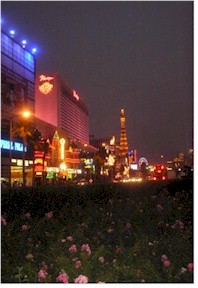 When we entered Ceasar Palace it was broad daylight, when we went out again it was dark. You really could see all the lights now. I wanted to take a look at the fountainshow at the Bellagio, next to Ceasar Palace. We were just in time for a spectacular show. Then I wanted to see the Vulcano eruption at the Mirage. It was very crowded and the eruption, not very impressive. The fountainshow was much better. Because the Strip is so large and wide there are taxies everywhere to bring you where ever you want to go. Seeing the entire Strip in just one day, it can't be done! The day after we went to see the Hoover Dam. Because we noticed one of our tires slowly started to flatten we went back to the campsite after just a glimpse on Hoover Dam. We also wanted to go to Bryce Canyon, but instead we brought another visit to Circus Circus. This was our last night here in Circus Circus and Las Vegas.